Begin typing your search above and press return to search. Press Esc to cancel.

Home of the iconic Eiffel Tower, decadent patisseries and the epic Tour de France, France is a vibrant European country brimming with exciting sights and sounds. It can be so easy to become overwhelmed when it comes to choosing where to go and what to see, so because we want you to have the best possible experience, we’ve compiled a list of the five top stop-off spots you should consider adding to your itinerary. Immerse yourself in French culture and get a taste of France at its best when you visit these hand-picked places.

Sit at a sidewalk café while enjoying a traditional croissant, gaze at feats of architecture like the Arc de Triomphe and the Eiffel Tower, and spend a day wandering along the Seine – this is glorious Paris in a nutshell. Why not make your Parisian experience unforgettable by combining liveliness and leisure? Fit in fine French dining with cultural visits to places like the Lourve and Notre Dame, and with the unrivalled shopping in Paris, there’s something for everyone. From street markets where you can find great bargains, to high-end designer stores, the city is truly a shopper’s dream. The city is also famous for its nightlife of course – we recommend the Moulin Rouge where you can indulge in cabaret at its finest.

Nice is a city is known for its cosmopolitan Riviera atmosphere. The beaches are famous for their sparkling blue waters (that give the Cote d’Azur its name) and are also popular sunbathing spots. As can be expected throughout the country, Nice offers incredible shopping opportunities with its many fashionable boutiques waiting to be explored. Foodies will also not be disappointed as they dine at some of the city’s splendid restaurants. Taking a walk up to Castle Hill for a stunning view of the city and the Bay of Angels is an ideal post-meal activity. The port of Marseille, France’s third largest city, is where history meets style. The bay is flanked by Fort Saint-Jean and Fort Saint-Nicolas, both of which shelter Château d’If, the castle made famous by The Count of Monte Cristo. Shopping areas mix with historical sites which are watched over by the basilica Notre-Dame-de-la-Gard. The vibrant French-African quarter is an absolute must for the adventurous shopper. 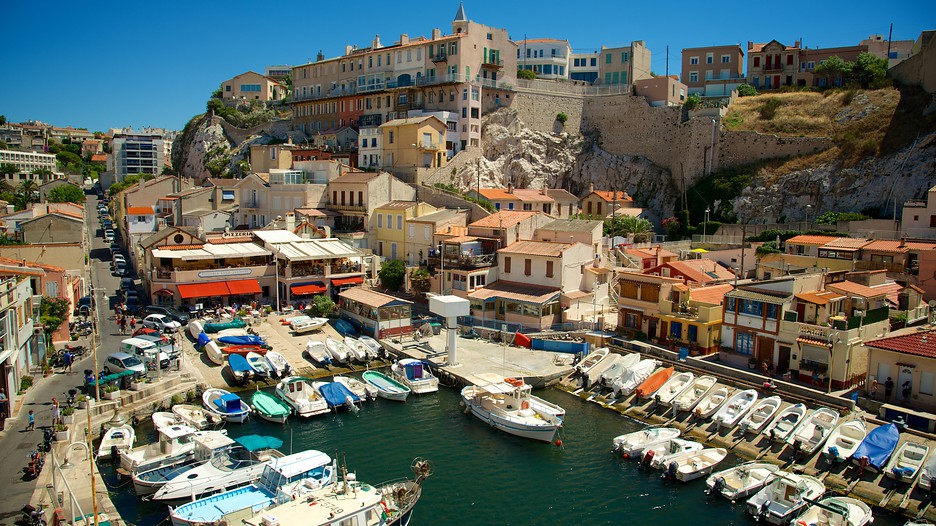 Lyon’s cobblestone streets have 2000 years of history imprinted on them so it should come as no surprise that this city is a UNESCO World Heritage Site. This sense of history is at its greatest in the Renaissance neighbourhood of Vieux Lyon, as well as in the city’s Roman amphitheatres which host rock concerts today. Music is a big part of life in Lyon and there are frequently music festivals as well as theatre festivals that take place. Shopping of all kinds is first class with the antique markets being particularly popular. There is also a range of museums waiting to be discovered, such as the Museum of Miniatures and Film Sets and the International Puppet Museum.

Bayeux is famous for its tapestry that depicts the 11th-century Norman Conquest of this northern French town. It can be viewed at the Bayeux Tapestry Museum after it was moved from the Bayeux Cathedral, which in and of itself is worth a visit. The impressive Gothic architecture, haunting crypts and stunningly detailed murals are sure to leave you in awe.

So what are you waiting for? Start plotting your route around this magnificent country. In the meantime though, you can sip on a glass of vintage brandy (made the French way!) while you dream of the wonders of France that await. Bon voyage!

+ There are no comments

The strangest creatures found across the world

A field guide to the buck of South Africa

So what are the activities

Nice Blog . Got lots of informations. Thanks for sharing this with us.